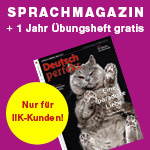 "Goethe Institut Athens" is one of the participants from Greece in DaF-Südost Netzwerk. Beside the english information below you will find more detailed information in german on this site.

Goethe Institute Inter Nationes is financed by the Foreign Office, the German Press Office, sponsors and income from the various institutes. The budget for 2001 was ca. 242 million euros, around a third of which was generated by the institutes themselves. The Head Office is split between two locations in Germany, Munich and Bonn.

The Goethe Institute Athens organizes about 70 differentiated German languages courses per year, on all levels and for a large variety of learners (children, youth, adults, young professionals), and offers examinations, diplomas and certificates that are recognized world wide. In the period from 1995 till 2002,, on the average more than 10.000 students yearly took part in the various exams. It is equipped with a computer centre with 10 work places that are being used for classroom activities, media-supported learning outside of the classroom and for training the teachers of the Goethe Institute. The web-side (www.goethe.de) offers a variety of on-line and internet-based study materials both for teachers and students.

The Goethe Institute Athens is employer to 100 persons, both Greek and German, among them 60 teachers. The Department for Pedagogical Cooperation operates on a basis of 2 full-time employees and up to 10 teachers who support the teacher training seminars and workshops, both in Athens and at numerous other places for teachers in primary, secondary and higher education and for continuing education. Thousands of Greek teachers of German as a foreign language have attended the special workshops, seminars and conferences.

The department caters to 6000 teachers of German in Greece a publication "Akzent Deutsch" twice a year. The Pedagogical Department houses a library with more than 2500 print and audiovisual and electronic items (books, magazines, newspapers, videos, CD-ROMs etc.) for the teaching of German as a foreign language. Partners include the Ministry of Education, German Teachers Associations, universities, higher education institutes, publishing houses and various specialists world wide. The GI Athens has been a participating institution of the Comenius 2 "GEH MIT" project (2001-2003). More information at

Key person responsible for the network:

At the Goethe Institute Athens will be Erika Broschek (Head of the Pedagogical Department) responsible for the network. She will be supported by Gaby Frank, responsible for new multi media education at GIA and active participant in the GEH-MIT project. Through longstanding involvement in on-going education for German teachers and dedication to new media in teaching and learning the GI team is highly qualified to be one of the partners in the network.